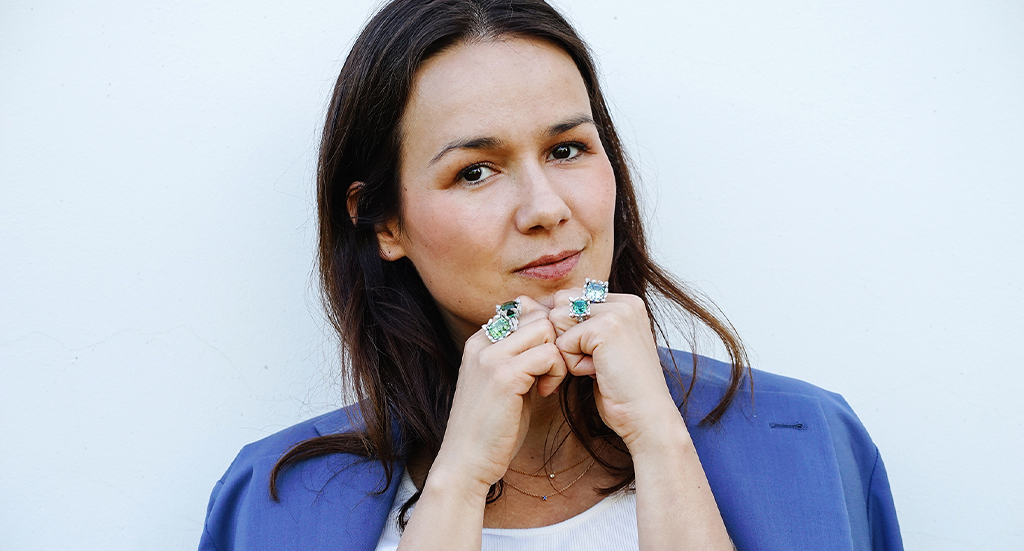 Guya Merkle
How to reinvent the jewellery business

It is much quicker to list what Guya Merkle has not yet done in the jewellery sector than vice versa. She is a jewellery designer, entrepreneur, activist, foundation founder and, incidentally, the best model for her own products.

While many big brands only do the talk when it comes to sustainability, she does the walk. With a German heart and an Italian soul, she has proven in a very short time that it is possible to be successful and act responsibly in the jewellery industry at the same time.

But this is only the beginning of her journey…  “benvenuto” to the world of Guya Merkle.

»My father taught me not to give a damn about what others think of me, but to stay with myself.«

You have Italian and German roots. Would you like to tell us a bit about them?

My grandfather, who brought the jewellery business into the family, came from southern Germany and met this dolce-vita-loving woman in Liguria and they fell deeply in love. My grandmother was really what you imagine an Italian woman to be like. So she moved to Pforzheim out of love and totally influenced the way my grandfather’s company went at that time.

With my father, on the other hand, the Italian side was already very strong and that has continued with me. I spent a lot of time in Italy during my childhood and youth, and of course I absorbed it. The way of life and the inspirational power that is a very strong formative element in this culture.

For me, it was a matter of course. It was later on in school when I did my a-level that I realised that this influence was not an everyday occurrence.

What happened after graduating from school?

But when my father died, I just didn’t feel properly prepared for the subject at all. So I went to London to the GIA (Gemological Institute of America) and really did every course and module you can imagine. I soaked up all the expertise to be able to take on the challenge.

So, the jewellery theme was love at second sight, so to speak?

That’s right, it was more of a rational decision at the time. And yet the year in London gave me that one moment when I realised what the fascination really was and that jewellery would be my path.

Besides the fascination, you then also made the decision in London to personally get a picture of the industry beyond the school courses. What happened then?

That was ultimately a very brief moment and impulse that I followed. I saw a photo of a gold mine at school and it seemed like a disturbing factor. So I decided to do some research on my own to be able to assess what it was really all about.

How did you do it, you don’t just get to visit a gold mine that easily, do you?

To be honest, the whole thing was based on a misunderstanding. When I contacted the relevant organisations in Peru to plan my trip, they mistakenly understood that I wanted to buy gold and agreed to my request.

On site, I then saw all the different types of mines. From the non-certified mines where it breaks your heart to see the working conditions to the Fair-Trade-certified mines. Here I was able to see what a difference such certification makes for the better. After I was able to get a very intensive impression of the conditions in the gold mines on site, the initial misunderstanding was cleared up at some point, of course.

But instead of being met with great disappointment and antipathy, something quite unusual happened. The people on site were very excited, open and flooded me with their ideas for optimisation.

So, one of the key moments that led to you becoming more and more intensively involved with the topic of gold?

Exactly. That was my very personal introduction to the topic of gold and it is still a totally exciting journey that continues because I am still learning. From an objective point of view, gold is of course a resource that we don’t necessarily need per se, but it has always been a material with which emotions, longings and beauty can be manifested in infinite facets.

I understood that in today’s world it is particularly important to face gold with a different approach and a different kind of responsibility. Especially against the background of the fact that gold can be recycled again and again without losing any of its quality characteristics.

And this new mental perspective led you to the concept of “Ethical Fine Jewellery”, right?

That’s right. Ethical jewellery production has to give back more than it takes. We only process recycled gold and use 100% gold from so-called urban mining. This is gold that is extracted from e-waste such as mobile phones, for example.

My company goes the extra mile by deliberately re-investing part of our revenues to build a realistic vision for the future in dealing with finite resources. We invest 12.5% of the turnover in the recycling company “Closing The Loop” in order to be able to do more urban mining in the long run and 50% of the profit goes to the Earthbeat Foundation. Only then our economic activity really makes sense on all levels. For me, that is the true luxury that it has to be about.

In 2012 you founded the Earthbeat Foundation. How did this idea come about?

The idea came to me on the plane back home from Peru. Of course I had seen a lot of negative things on the ground, but the positive impressions outweighed them. The pride of the people and their constructive input resonated and gave me the idea to establish a foundation as a platform for new approaches to solutions in this context.

Of course, I had no idea what I was in for. In the meantime, we have a permanent team of five and of course a network of about twenty-five people who support us regularly. We are now closing the first three mining pits with the foundation. This has never happened before in the history of gold mining, that active pits are being filled in and permaculture gardens are being established on top of them to offer the local people alternative sources of income.

In retrospect, it’s a quite good story to tell, but there were moments when I had doubts. In 2012, almost no one believed in the topic. In my function as the founder of the foundation, I naturally spoke to all the big players in the industry at the time, including the watchmaking industry, but no one could really get to grips with the subject. But that is changing for the better lately.

Coming back to the mines that will be closed in the future, how much gold has been mined there per year to date?

Yes, per pit it is 100 to 200 grams per year. The community in Uganda that the foundation works with consists of 3,000 people  who get just one kilo a year from six pits. That is hardly profitable. That is why it is so obvious to create alternatives locally and at the same time invest more in urban mining.

You founded Vieri in 2015. What piece of jewellery did it all start with?

With the big “Cloud Ring”. That was still a gamble at the time, because the target group that could afford it was not at all familiar with the concept of ethical jewellery. Again, it took time.

Do you have a classic design process?

No, I don’t have one. Things just happen to me. That’s why we also have anti-cyclical product innovations, because I can’t and don’t want to design at the push of a button.

I have to feel inspiration, which doesn’t come at 9 a.m. on the dot, but sometimes at night or in between. Then I quickly make a sketch or jot down a keyword to capture the spark.

In 2019, you launched World Gold Day. How did that come about?

The idea actually came out of a kind of frustration. Because in terms of gold recycling, everything is there and everything is feasible. Unfortunately, there are too few electronic devices to recycle because they either lie in the drawers of this world or end up in dubious ways in landfills in Africa. And that’s why I asked myself how people can be activated.

It is not a question of giving up consumption, but simply an awareness among people that we have to come in a cycle. It is a matter of giving things back, not hoarding them. Even all our mobile phones. And that’s how World Gold Day really came into being. In the meantime, Deutsche Telekom has become a collection partner for the campaign in November and the colleagues donate another sum to the foundation for each phone collected, which is great.

The next World Gold Day is on the 15th of November by the way.

Back to Vieri. You produce in Italy and in Germany. How should one imagine that?

In Germany, I went back to the roots and have production in Pforzheim. The quality of the whole process is unbelievably high there. And I’m very grateful to have found a cooperation partner who got involved in the complex integration of mobile phone gold and rethought.

The cloud collections, on the other hand, are produced in Valenza, near Milan, because the Italians understand very feminine and organic shapes very well. This has always been a very special process locally. No matter what’s going on, at 3 p.m. at lunch everyone from the cleaning lady to the boss and the customers sit together at the same table and eat pasta (laughs).

The opposite would be machine-made jewellery in Asia, but of course that’s not an alternative. A thousand times cheaper but without soul.

Were there any special moments in your journey with your brand from 2015 to today?

The first evolutionary step for me was to see and understand my company as a whole. At first I had just started and did things one by one, but only in the second step did I change my perspective on what I was doing. It was also important to look closely at what my target group really does and likes.

That was in 2017 when I consciously changed my collections and I suddenly got into the flow. The young target group came and gave me the necessary support.

So, is the conscious change of perspective now an important part of your management?

Absolutely. I have really made this company my own. In the beginning I also listened to a lot of advisors, but I really could have saved that completely. I first had to learn to trust myself.

Were there any role models in this context from whom you could learn this self-confidence?

I found out on my way that I am already very much my father’s daughter. For him a “no” was never an option, nothing was impossible. My father taught me not to give a damn about what others think of me, but to stay with myself.

Where is the journey going for VIERI? Will you stay with jewellery or are there other themes in which you will establish yourself?

I still have a lot of plans with Vieri, but it will always remain beautiful niche. There I am an activist entrepreneur with a dose of dolce vita and I want it to stay that way. However, my entrepreneurial vision is not automatically linked to Vieri.

I am consciously structuring my company in such a way that I can detach myself more flexibly if necessary in order to be able to focus better on mid- and long-term projects and collaborations. It’s just a self-earned privilege to be able to look forward to one’s own future, isn’t it! 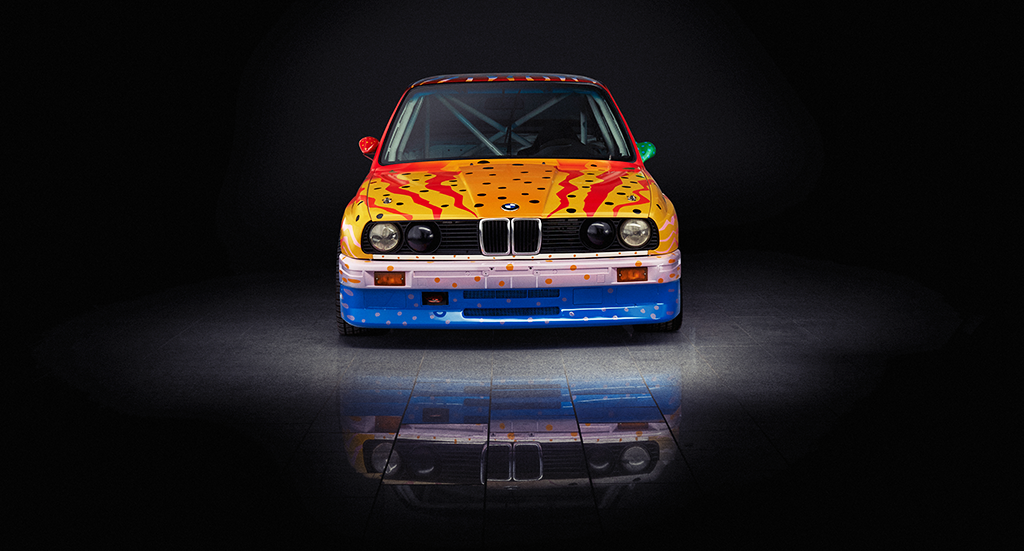 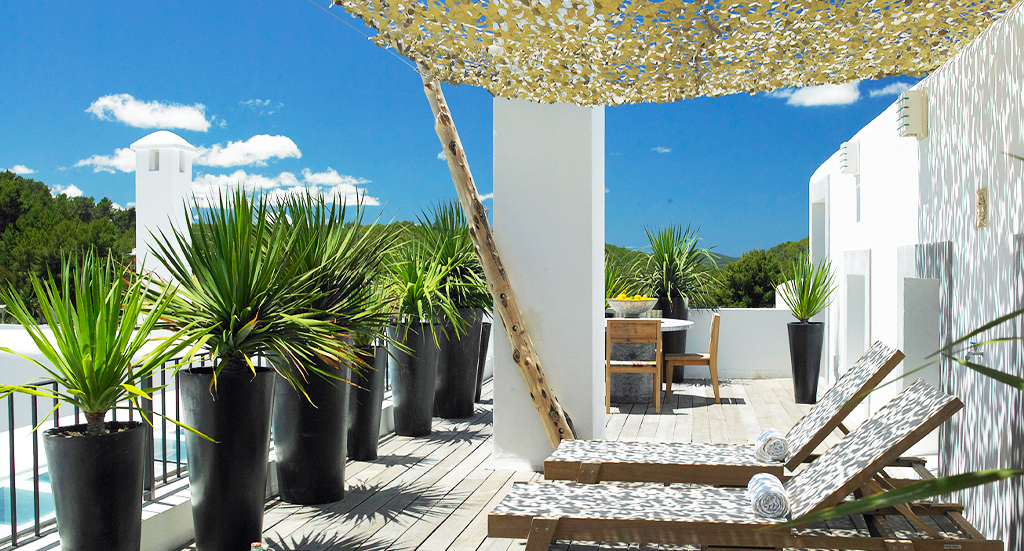 The Giri
The luxury oasis in Sant Joan de Labritja 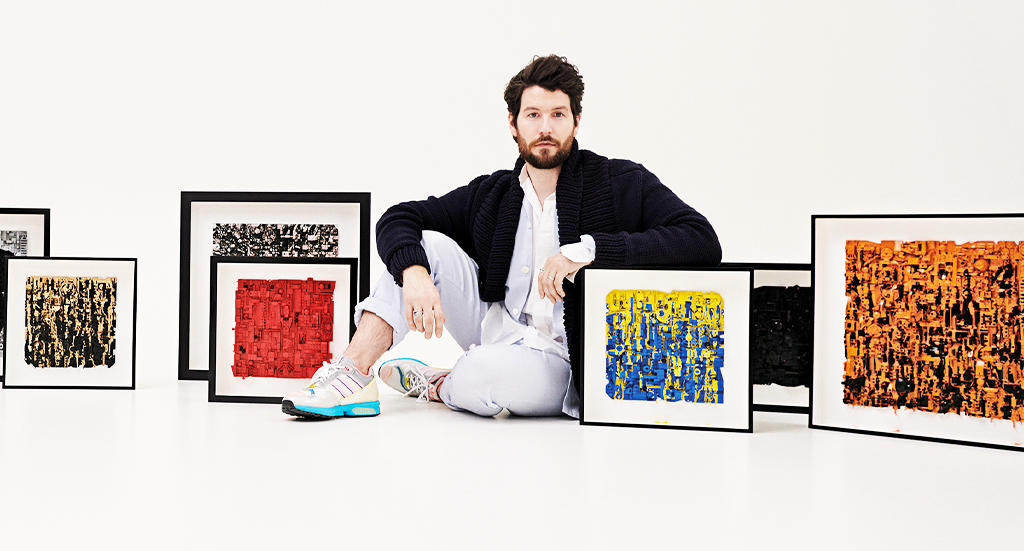