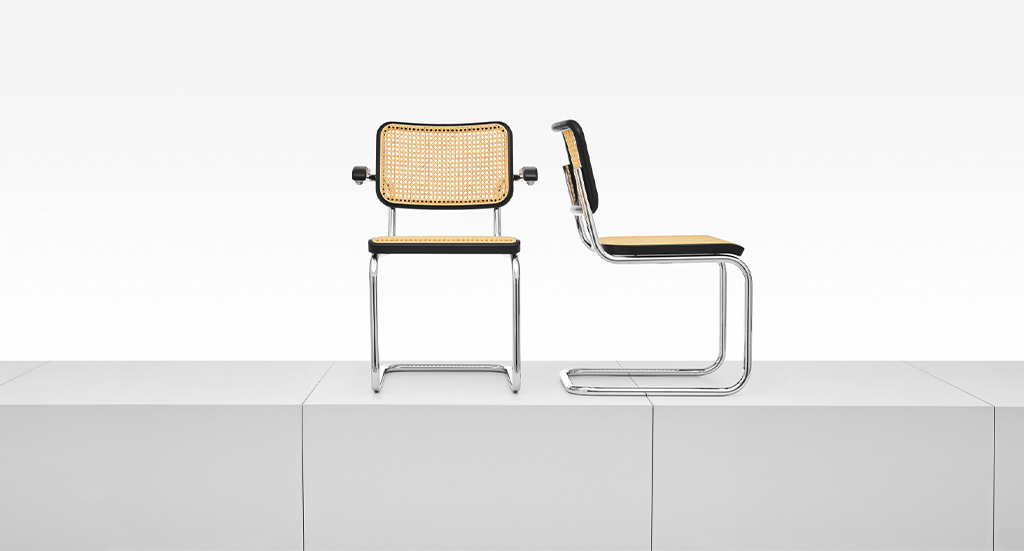 Would you agree that good design is as little design as possible? Then allow us to introduce you to Marcel Breuer, a man who changed the world of furniture design a hundred years ago after riding his bike. His simple but elegant design approach, which he developed in the 1920s, has stood the test of time and still makes us sway imperceptibly when we sit in one of its cantilever chairs.

After studying art in Vienna, he moved to the Bauhaus in Weimar in 1924, where he completed an apprenticeship as a carpenter. In 1925 he took over the management of the carpentry workshop there and developed at the same time his first tubular steel furniture designs at the Bauhaus Dessau. But it took some time and new alliances before the success story of his ideas really began to evolve in 1929.

The EDUCATED COOL spoke to Norbert Ruf, Thonet Creative Director, about one of the most extraordinary collaborations in the modern history of design.

»It is the aesthetic reduction and graphic clarity that have made the classics from Breuer timeless.«

The meeting of Marcel Breuer and Thonet must have been a tremendous stroke of luck for both sides. In retrospect, is it possible to understand who made the first move and why?

In 1926 in Berlin, Breuer and his compatriot Kálmán Lengyel founded what would today be called a start-up: the company Standard-Möbel dealt with the production and distribution of furniture made of tubular steel.

After demand for the Standard-Möbel portfolio failed to materialise, Breuer sought an exchange with the industry and thus also with Thonet. This led to Standard-Möbel being taken over by Thonet in 1929 and Breuer working with and for Thonet for several years.

Is it true that we ultimately owe the cantilever chair to the original cooperation between Marcel Breuer and the aircraft developers at Junkers?

To be honest, it is not possible to answer this with absolute certainty. The first prototypes for his furniture designs with steel and tubular steel were created during his time at the Bauhaus in collaboration with other companies and thus also with Junkers in Dessau.

The inspiration for the choice of material, however, came to Breuer – at least according to an anecdote – when he was riding his bicycle. He was thrilled by the shiny and curved handlebars of his bicycle of the German brand Adler (Eagle). He even tried to win the Frankfurt manufacturer as a production partner or material supplier but was unsuccessful. Thonet finally believed in the use of the new material and had the capacity and competence for professional production.

It is the aesthetic reduction and graphic clarity that have made the classics from Breuer timeless. Added to this is the flexibility with which the design fits into the most diverse environments. Tubular steel furniture – in the past as well as today – is influenced by changes in society, living conditions and trends and is continuously developed by Thonet to keep it contemporary. In this way, every generation can rediscover the design for itself with newly interpreted materials, surfaces or colours.

What role does Marcel Breuer play for European design history beyond the Thonet context from your point of view?

Many of Marcel Breuer’s designs are considered modern classics today. Due to his Jewish origins, Marcel Breuer emigrated to the USA in 1933, taking the Bauhaus with him. The concepts of the Bauhaus designers fell on fertile ground in the USA and from there in turn influenced design and architecture in Europe.

Almost one hundred years ago, it was tubular steel that revolutionized furniture design. Which materials will play a new or special role for Thonet in the 21st century?

That’s a good question. Will it be a new material or a processing technology that offers new possibilities? I have to admit that I cannot yet identify anything clear-cut. Presumably, the world will have changed substantially again by the 22nd century. So, I am confident that something will also happen in the furniture sector and I am really looking forward to that.

Thank you for our conversation, Norbert Ruf!