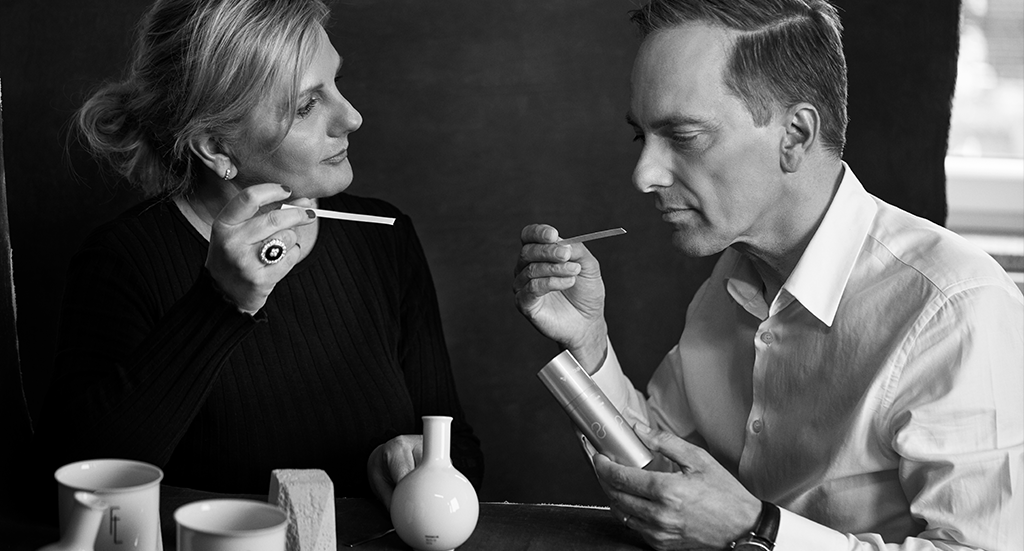 Ina Dimsky-Legart about Deage, her husband and their passion for skin care

DEAGE’s high-quality serums blend two things that are still not considered to belong together in today’s world of beauty: 100 percent natural skincare and the most well-founded high-tech research and production.

We talked to Ina Dimsky-Legart about Deage and all the other amazing brands, her husband and the poetry of composing Mother Nature’s best gifts.

»And then came the offer from Kitzbühel, a sign that showed us the way.«

Did you know from the beginning that your path would lead you into cosmetics?

No, not really. As you know, my husband, Frank W. Legart, is the founder and creative head of the company. When I met him in a creative agency where I worked, he had already found his way into the cosmetics industry and made a name for himself as a recognised scientist and cosmetic chemist. At the age of 25, he had already arrived at the cosmetic Olympus as the research and development manager of an international company.

My husband bought a company in Kitzbühel and with it was a SPA brand, DEAGE. At some point, the time spent commuting between Berlin, Miami and Kitzbühel became too time-consuming. I also ran out of arguments not to move to Tyrol, so I had my first intensive contacts with the creation and production of products. And that’s how we came to the decision to act together, both professionally and privately (laughs).

What was the trigger moment that led to your husband founding his own company in 2003?

There was actually not really that kind of trigger moment, to be honest. My husband is an entrepreneur par excellence. He knew very early on that he was going to start his cosmetics company. It was not his first company, because he already founded his first start-ups during his studies and even during his management functions in the cosmetics industry he still found enough time and energy to found other companies and gain experience.

In addition, my family background, I come from a family of entrepreneurs – my grandfather is also not entirely uninvolved, a pioneer and entrepreneur of the first hour with passion and vision. He saw in my husband the entrepreneur he once was. And then came the offer from Kitzbühel, a sign that showed us the way.

DEAGE is one of your company’s three product lines. How long has the line been around and what distinguishes it from the other two, Ambuja and Skinfusion?

In 2012, we launched ambuja in New York as a minimalist, absolutely pared-down luxury natural cosmetic art, based on our patented SUPERFLUID™. DEAGE has been around since the company’s launch in 2003, but we completely relaunched the brand and its portfolio in 2015. Clean, modular, individual. Mix&Match is the answer to exactly what every consumer wants, their customised skin wardrobe, so to speak.

S/F SKINFUSION is the third in the bunch, a brand that was created during the pandemic and serves as the ultimate freshness cure and dynamic all-round care with German research expertise. The key technology anchored there knows what the skin is calling for, what it needs to regenerate optimally and reactivate the body’s own self-healing powers.

How long do you usually need to develop a product? And how can one imagine the process?

The development of a finished product usually takes one to two years. We are responsible for ensuring that the creative idea can develop healthily like a baby, and we are, so to speak, the parents. Afterwards, we follow its development, help it learn to walk, teach it to talk and are happy when it leaves our lab house and successfully goes out into the world. We see ourselves as its parents and are by its side throughout its life.

How, for example, does the identification of the efficacy of ingredients such as Chios pistachio, Verek acacia or snow crocus come about?

My husband describes his work like that of a composer. At the beginning it starts with a search for ideas in front of an empty sheet. The basic motif is defined, a melody for it is already buzzing through his head and he begins to paint various »clouds« on the empty sheet. One cloud belongs to the active ingredients, a second will hold the caring oils, a third will ensure that the composition is microbiologically protected from spoilage by suitable substances.

Then there are clouds for the olfactory pleasure, very important, and even smaller clouds for the pH value, the haptics, the galenics, and so on. All in all, he counts seven to eight clouds on his sheet.

Every single idea, no matter how crazy, goes into its predetermined cloud. In the end, a cloud motif is created, a final atmospheric image. The composition then sounds for the first time in a minor or major key, sometimes light and playful. Like the snow crocus or like the Chios pistachio. The latter is ripened on a Greek island, sun-drenched, intense and incisive.

Many people can’t imagine how all the clouds and chords have to interlock harmoniously to produce something grand, something cuddly and holistic at the end. Something that you can’t get out of your head, a melody that you keep humming to yourself. A cosmetic melody of the senses.

So, the source of inspiration is nature, isn’t it?

Absolutely. Here one often finds the answers to many questions. Mother Nature hands them to us on a silver platter and it is a matter of seeing these answers, discovering them, decoding and extracting them. Everything is there, you just have to see it. That is biomimetics.

Many processes in nature are controlled by small molecules that communicate in a highly complex way and often act together according to the lock-and-key principle. We look for substances that are known to nature or human skin and thus do not represent a synthetic foreign body.

You proclaim “0% standards”. What do you mean by that?

DEAGE / Intelligent Beauty is 100% Clean Cosmetics and free from preservatives, synthetic fragrances, dyes, paraffins, raw materials of animal origin, etc.. This means that we are 0% synthetic and useless products are 0% neutralised or not used.

Exciting projects! There is news in the brand world of DEAGE and ambuja. In the field of consulting, our think-tank lab is always the partner when it comes to real problem solvers or the actually unsolvable. We are the fire brigade, the night shift, the negotiator and the diplomat.

And now there is another still-secret cooperation in the field of medical and pharmaceutical products with a well-known international pharmaceutical company. And an MIT project is on the way as well. So, it won’t be boring (smiles).