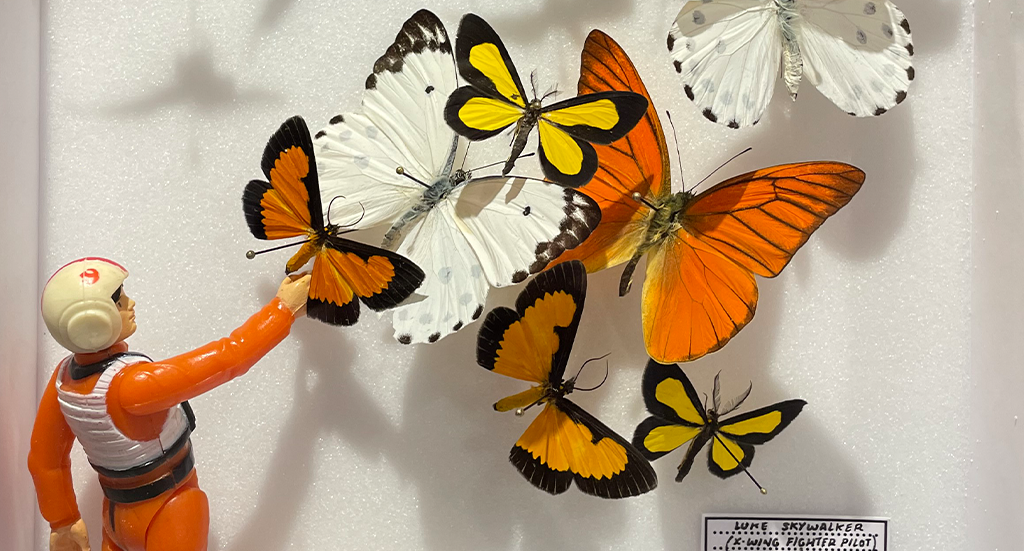 Imagine strolling through the nearly endless floors of Le Bon Marché in Paris on a rainy Sunday morning.

You are surrounded by tasteful brands, great fashion and accessories … and suddenly, in the corner of your eye, you see something very familiar from a long time ago that has little to do with the world of the luxury department stores’.

It looks familiar, but something is different. Suddenly you are standing in front of various small boxes with wonderful little worlds inside. Welcome to the art of Benjamin Pietri!

»The idea is to imagine that each character finds its bestial avatar or a combat partner.«

Hi Benjamin, we recently met in Paris at Le Bon Marché where you exhibited your “Galaxidermy” boxes. Please tell us about them and how it came about.

These strange boxes are mixing vintage Star Wars figurines edited by the American firm Kenner in the late seventies till the beginning of the 80s and bugs or butterflies. The idea is to imagine that each character finds its bestial avatar or its winged mount or a combat partner.

With the match of colours or textures, everything becomes possible. Some butterflies in their movements can also symbolise the character’s thoughts or dreams of faraway galaxies… I also imagine the Star Wars heroes witnessing swarms of giant insects native to their planet.

I got the idea after having realised that in most of sci-fi movies, many things were inspired by nature or insect world. From the organic shapes of the starships till the faces of some characters. And when you see them sometimes ride giant lizards or dragonflies… my concept appeared quite coherent.

You were born one year after the first Star Wars film hit the cinemas worldwide. When and how did you connect first to that saga? Did you play with the figures as a child?

I first connected to the saga thanks to the toy-line. At that time, when I was 4 or 5, it was all about the toys and nothing but the toys. The interest for the movies came a few years later, when I had more patience to sit in front of a screen.

But the toys… I instantly became mad of the matt colours, the shapes of the cloaks, armours or helmets and the diversity of monsters, big or small. The great design of the blisters in itself with the Star Wars logos in red. A true religion!

Only for their design. The importance or the cult side of this or that character came later, when I was a pre-teen.

Where did you get all these glorious old figures?

I have three suppliers in the US, in England and in France. I need the three of them as I use a lot of figurines. I can sometimes reach the number of 5 to 6,000 toys in my inventory.

And where did you get the insects and little animals from?

I’m working with two of the best entomologists in France. They provide me those insects who either come from breeding farms all around the world, or from auctions. Some of the butterflies I use are 40 or 50 years old… and still keep the same astonishing colours.

You are also combining other characters with “your” little creatures. What are they, for example?

I’m lucky enough to work with some of my favourite artists and companies. I often collaborate with the french street artist Mr Chat (Mister Cat) who puts his emblematic little winged cat in my boxes, for poetic ensembles with flights of butterflies. But I’m also working with the company Leblon Delienne, which edits sculptures under licence. I’m working with their ‚Le Petit Prince‘ and I’m also collaborating with the guitar brand Gibson.

I’m creating flights around electric guitars in suspension. Last but not least, I’m making lots of ‚sur-mesure-boxes‘ with personal objects of my clients, small ‚Madeleines de Proust‘ of their own.

Besides Star Wars, what is your favourite pop-culture character?

Impossible to quote only one of them! I’m a big, big fan of Stan Lee’s Silver Surfer, but as well as Grendizer (a Japanese giant robot) or Atom Boy. I love Quino’s Mafalda or Jim Davi’s Garfield. And nowadays, I’m totally fascinated about the New York artist Kaws, with his iconic «companions».

What is the “Pocket Factory”? Please tell us about it and your role there?

Pocket Factory is the name of my little company. I used to sell vintage furnitures (seats, lights…) a few years ago, but also edit serigraphs or stuff like that. When I started to create those small boxes, and as I am working alone, I thought the name ‚Pocket Factory‘ was very coherent. I am the father of this online adventure and I’m doing all by myself from the creation to the communication and the marketing of my boxes.

Can you still be found at Le Bon Marché?

Yes, I can. I’m showing my work there until January 2022, but I will often come back during that year.

Where can one see and order your boxes?

My work is also visible and buyable in other galleries such as Gallerie Bettina in Saint-Germain-des-prés area and concept stores or hostels in Paris. From Le Fouquet’s to Arty Dandy or Fleux in Le Marais.

One can also order directly from me by making a screenshot of something they like on my professional instagram account ‚thepocketfactory‘. I answer at the speed of light!